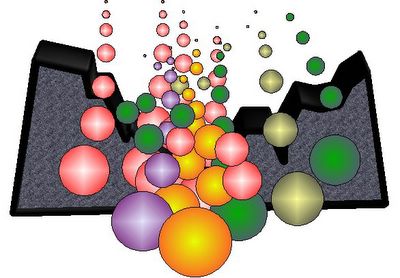 It is generally agreed that Adam Smith, when he suggested that the division of labour leads to inventions because workmen engaged in specialised routine operations come to see better ways of accomplishing the same results, missed the main point. The important thing, of course, is that with the division of labour a group of complex processes is transformed into a succession of simpler processes, some of which, at least, lend themselves to the use of machinery.

Little could the economist Allyn Young, in writing the above in 1928, have dreamed to what extent "simpler processes" would come to dominate industry. Nor that one particular simple process - digitalization would permeate throughout all economic endeavor.

Information Technology thrives on an unparalleled commonalization of human effort. The common denominator, the simplest of all processes, is the bit, the material expression of what is logically true or false. In the IT world everything is cached, counted, carried and consumed in the form of digital bits: Chinese opera recordings, hip bone x-rays, customs declarations, pictures of nude people in compromising poses, building plans, court orders, Shrek II, barometric pressure at the North Pole, the simultaneous chatting of tens of millions of teenagers, the nerve system of your automobile.

Since so much enterprise and activity virtually share the same laboratories, production plants, and distribution channels, the efforts of each are to the benefit of all - one for all and all for one.

Long before the invention of the transistor Young wrote:

Every important advance in the organization of production, regardless of whether it is based upon anything which, in a narrow or technical sense, would be called a new "invention," or involves a fresh application of the fruits of scientific progress to industry, alters the conditions of industrial activity and initiates responses elsewhere in the industrial structure which in turn have a further unsettling effect. Thus change becomes progressive and propagates itself in a cumulative way.


Classic examples of path dependencies in technology are the QWERTY keyboard and the VHS player/recorder3. Whether the network effects of these two solutions shut out technically supperior competitors, or not, is still contentious, but regardless, their scope is limited by the singularity of thier utility and purpose.

2Further, path dependencies are psychologically reinforced. A decision makers attitude towards a concept or products feature set, tends to change ex post the decision, and her preferences will be readjusted in line with the actual outcome of her choice. For example, in a choice between apples and pears one might chose the former on the strength of their flavour despite the occurrence of less seeds in the latter. After a choice was made in favour of apples, the disadvantage of the seeds would be discounted. Dan Simon, Daniel C. Krawczyk, and Keith J. Holyoak Construction of Preferences by Constraint Satisfaction http://lawweb.usc.edu/faculty/documents/ConstructionofPreferencesbyConstraintSatisfaction.pdf

3The keyboard skirmish concerned not just what sort of typewriter you or your company might buy but also as a consequence of that purchase, what sort of typing skills you would be investing in. And the video recorder fight entailed, beyond what make of machine you chose, the investment in media (cartridges and tapes) that would work in only one type of machine. Path dependencies have network effects. Eventually a large pool of QWERTY trained typists and VHS standard cassettes would seal the fate of the competing Dvorak and Betamax technologies. http://www2003.org/cdrom/papers/alternate/P552/p552 FitzPatrick.html

4Actually there is still one large stumbling block for the convergence of television and computing  the screen technologies; interlaced for television, and progressive for computer monitors are not readily compatible.